Zhao won the Oscar for "Nomadland," her third feature directorial effort following "Songs My Brother Taught Me" and "The Rider."

Chloé Zhao won the Academy Award for Best Director thanks to “Nomadland,” becoming only the second woman in the 93-year history of the Oscars to win the category. Zhao took home the prize over fellow nominees David Fincher (“Mank”), Aaron Sorkin (“The Trial of the Chicago 7”), Thomas Vinterberg (“Another Round”), and Emerald Fennell (“Promising Young Woman”). “Nomadland” is Zhao’s third feature directorial effort following “Songs My Brother Taught Me” and “The Rider.” She is also the first Asian woman to be nominated for and to win the Oscar for Best Director. 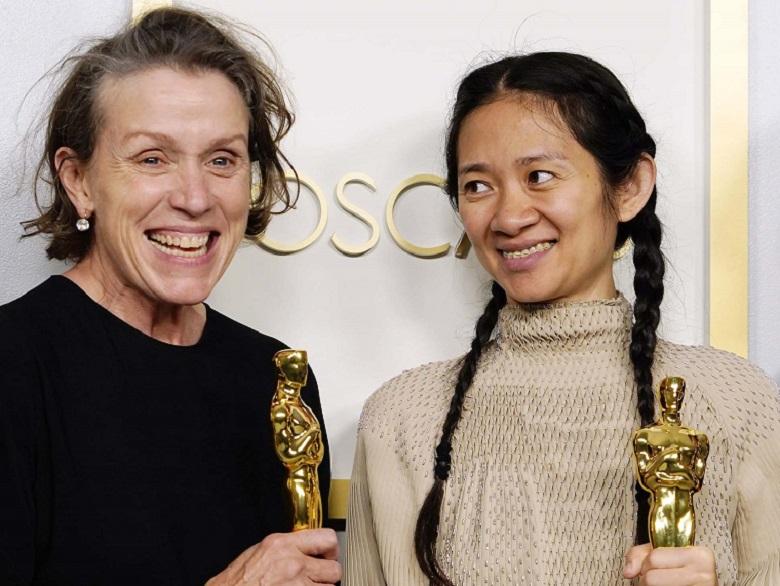 Prior to the 2021 Oscars nominations announcement, only five women had ever been nominated in the Best Director category: Lina Wertmüller (1976′s “Seven Beauties”), Jane Campion (1993′s “The Piano”), Sofia Coppola (2003′s “Lost in Translation”), Kathryn Bigelow (2009′s “The Hurt Locker”), and Greta Gerwig (2017′s “Lady Bird”). With nominations for Zhao and Fennell this year, the total number of Oscar-nominated woman for Best Director rose to seven. The 93rd Academy Awards is also the first time two women made the cut in the Best Director category in the same year.

Zhao was the favorite to win the Oscar for Best Director going into the 93rd Academy Awards ceremony. The filmmaker dominated the category all season long, winning Best Director prizes at the Golden Globes, the Critics’ Choice Awards, the BAFTA Film Awards, and the Directors Guild of America awards. Zhao also received the Golden Lion at the 2020 Venice Film Festival, where “Nomadland” had its world premiere.

With her “Nomadland” win, Zhao joins Kathryn Bigelow as the only female winner of the Best Director Oscar. Bigelow won her Best Director trophy for “The Hurt Locker,” which also went on to win Oscars for Best Picture and Best Original Screenplay. After Bigelow’s historic win as the first woman Best Director winner, no female directors were even nominated in the category until 2018. That was the year Gerta Gerwig became the fifth woman nominated for Best Director with her solo feature directorial debut “Lady Bird.” Gerwig ultimately lost out to Guillermo del Toro for his Best Picture winner “The Shape of Water.” Women filmmakers were then shut out in 2019 and 2020, despite there being several worthy contenders such as Gerwig for “Little Women,” Céline Sciamma for “Portrait of a Lady on Fire,” and Alma Har’el for “Honey Boy.” The shutting out of women directors at the 2019 and 2020 Oscars led to widespread backlash.

“I tried to focus on the human experience and things that I feel go beyond political statements to be more universal — the loss of a loved one, searching for home,” Zhao told IndieWire last year about her now-Oscar winner “Nomadland.” “I keep thinking about my family back in China — how would they feel about a cowboy in South Dakota, or a woman in her 60s living in America? If I make it too specific to any issues, I know it’s going to create a barrier. They’d go, ‘That’s their problem.’”

Next up for Zhao is the release of her Marvel Cinematic Universe entry “Eternals.” The Oscar win will make her the first Academy Award winner for Best Director to helm a Marvel project. The filmmaker previously told IndieWire, “I’ve been a fan of the MCU for over a decade, so it makes sense for me to jump into a Marvel movie. I want to make films that last, that have a timeless feel to them, that aren’t just a flash in the pan with whatever topic is trending on Twitter right now. I’m not interested in that stuff.”

“I’m not the kind of filmmaker who just makes films,” Zhao added. “I have to be in love with my subject matter and want to learn more about it. Someone once said to me that passion doesn’t sustain, but curiosity does. I have to be excited by little things I discover along the way.”

With her Oscar in tow, Zhao is moving into the Hollywood studio system. The filmmaker is also attached to direct a Western science-fiction spin on “Dracula” for Universal Pictures.

The meeting was held within the frame of the project “Women’s Empowerment and Meaningful Participation in Local Gender Politics”, supported by the Danish organization “KVINFO” and Ministry of Foreign Affairs of Denmark

Born in Soviet Georgia in 1941, Nona Gaprindashvili began playing chess at age five. By 37, she was a grandmaster. The Thomson Reuters Foundation speaks to one of the legends of the chess game